I’m sure that for many of you English illustrator and artist Louis Wain (1860-1939) needs no introduction. His saucer-eyed cats are top-notch beautiful magic-realism for some but trashy biscuit tin tat for others. I’m in the first group, I love Louis Wain and if I ever had enough pennies to buy one of his first edition turn-of-the-century books (some go for £500+) then I wouldn’t think twice about doing so. 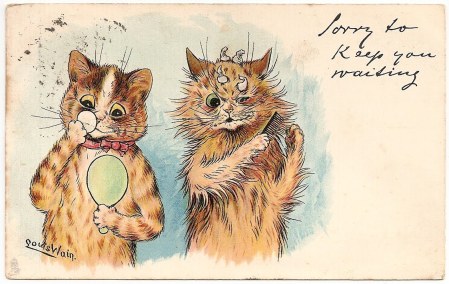 Louis started out his career specializing in drawing animals and wildlife scenes for journals and magazines. At that time he was painting rather naturalistic looking animals, including cats, although you could still see the huge-eye influence even then. It wasn’t until 1886 that he started to draw anthropomorphised cats in humorous vignettes. He spent some time in New York in 1907, employed as a comic strip illustrator. On his return to England, broke, his family troubles and mothers’ death taking its toll on him (read more about that here), his mental health went into decline.

Wain suffered from delusions, his behaviour and character did an about turn. He became suspicious and hostile, especially to his sisters, who suspected schizophrenia (disputed by some) and finally committed him to Springfield Mental Hospital in Tooting. He was eventually moved (with the help of H.G. Wells) to Napsbury hospital where he spent the rest of his days, with a colony of 15 cats, writing and drawing for pleasure. During this time his drawings took on an abstract, psychedelic theme. This is my favourite period of Louis Wain work, sadly at the cost of his peace and poor mental health.