At the same time as Bobby Baker’s diary drawings, Madness & Modernity was a special exhibition held at the Wellcome Trust Museum in Euston, London in 2009. Curated by Dr Leslie Topp (Senior Lecturer in History of Architecture at Birkbeck, London) and Dr Gemma Blackshaw (Lecturer in Art History at the University of Plymouth), this exhibition continued on the theme of madness in art and the concept of therapeutic methods and systems rather than a medical history and study of psychiatry and the mind.

In other words you’d think it was all models of majestic buildings, pictures of Freud’s couch and desk and paintings of expensive sanitariums for the blithely bourgeois. On the surface that is true. There was much of the aforementioned, but there was also that dark, salacious side that pumps money into shows like Bedlam and keeps ‘life story’ horrors at the top of WH Smith bestseller lists: The ‘Tower of Fools’; a Viennese ‘madhouse’ built in a doughnut shape, all windows facing other ‘inmates’, seemingly endless, winding corridors. A photographic catalogue of ‘female hysteria’, nude, contorted female bodies with ink scribbled observations around the edges, notes of the most dubious of treatments for the most dubious of ‘illness’. Sensationalist but for the fact that it was at one point reality for some. It brought the curious in to the exhibition so fair enough. 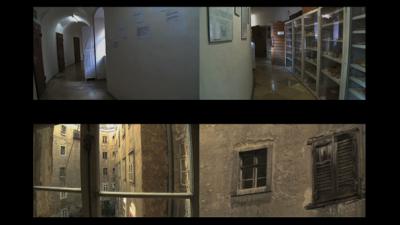 The reason I went was to pore over the artists included in the Pathalogical Portraits and Patient Artist sections of the exhibition. Included in Pathological Portraits were images by Oskar Kokoschka and Egon Schiele both anarchic offenders and stalwarts of pathalogical portraiture. After drooling over their works (if I remember correctly, prints of), I went to the Patient Artist section, for me a case of saving the best till last in this exhibition.

The collection assembled was from 1919 onwards by the psychiatrist and art historian Hans Prinzhorn in Heidelberg, Germany, originating from a private asylum in Vienna. The collection features the work of ‘Frau St’, an anonymous patient with the diagnosis of schizophrenia, and Josef Karl Radler, a porcelain painter who spent most of his life in psychiatric institutions.

There is now a book about the exhibition, available to buy from The Wellcome Collextion.