Ever fancied hand-publishing the story of YOU in a multi-fold, one tear only, no staple, no glue book, to the many-layered tunes of potatoes, onions and garden-found Action Men, sweetly strummed, plinked and plonked by the nation’s favourite poet-ato, Mr John Hegley?

Too late. We’ve already gone and done it. But hey, you can read about it here and see what excitements we’ve got coming up next (psst, it’ll be a three-week residency at Studio 3 Arts, Barking).

To celebrate Mental Health Awareness Week 2015, in support of our favoured charity, the Mental Health Foundation, Mental Spaghetti teamed up with John Hegley and Free Space Gallery at the glorious Kentish Town Health Centre to bring a mixed full-house of a combined 30 mental health service users, people with lived experience of mental health difficulty, and other interested parties, a creative writing and drawing workshop.

Using an old zine technique of a one page fold, to make a six page zine with front and back cover, John guided our participants through a sometimes-sing-a-long creative process of word association, self-expression, poetry and musings on memory, in an alphabet of A-G. Oh, and we also demanded a drawn dromedary AND camel.

Here are some examples of the zines we created:

“Words that rhyme with camel, and… dromedary”

“Now draw the ear of the person next to you, and…flight” 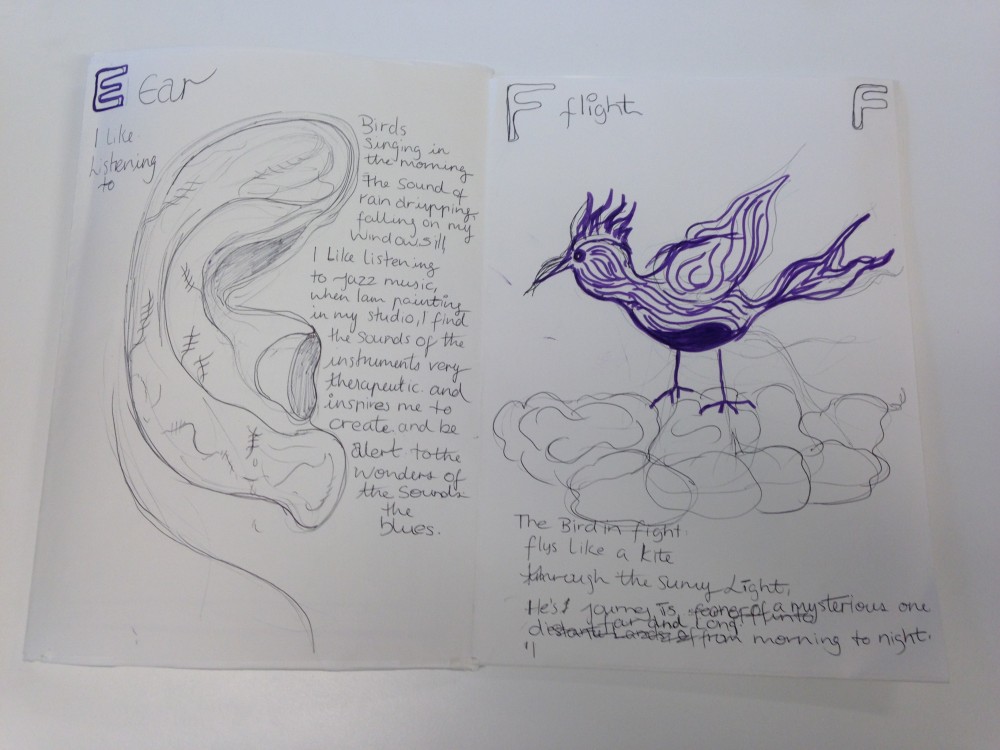 The most rewarding part of the workshop, aside from people making friends and exploring their creative tendencies, was the shared experience of some participants having never set foot in a creative environment before, seeing how their own previously undiscovered capabilities enabled them to draw, read their private thoughts aloud, and even sing a little solo in front of a 30 strong group.

The day was absolutely gorgeous, weather wise, so we took ourselves outside to the Wellbeeing (yes, a bee pun!) Garden to have a paper aeroplane competition. This may seem like a tangent, but it was book related, you see, falling in on the 5th page, F for Flight, as our book was guided by an A-G alphabet, was a paper aeroplane constructed from rather special brown butchers paper.

John manned the target, a bucket, no hole, Liza, and I announced the countdown. Flight was flying with a brown paper aeroplane, and although there were no physical prizes to be had, the jaunt out to fly our planes and see the birds and bees, and have a chat with the resident Wellbeeing Botanist, was gift enough.

Back indoors in our industrious workshop space, we pondered the back cover of our book, an ode to G, and the timely word ‘Goodbye’, the last task of the workshop. If you were wondering what on earth I was on about earlier, potatoes and onions and Action Men, here’s where this comes in. Goodbyes are said, books are shared. 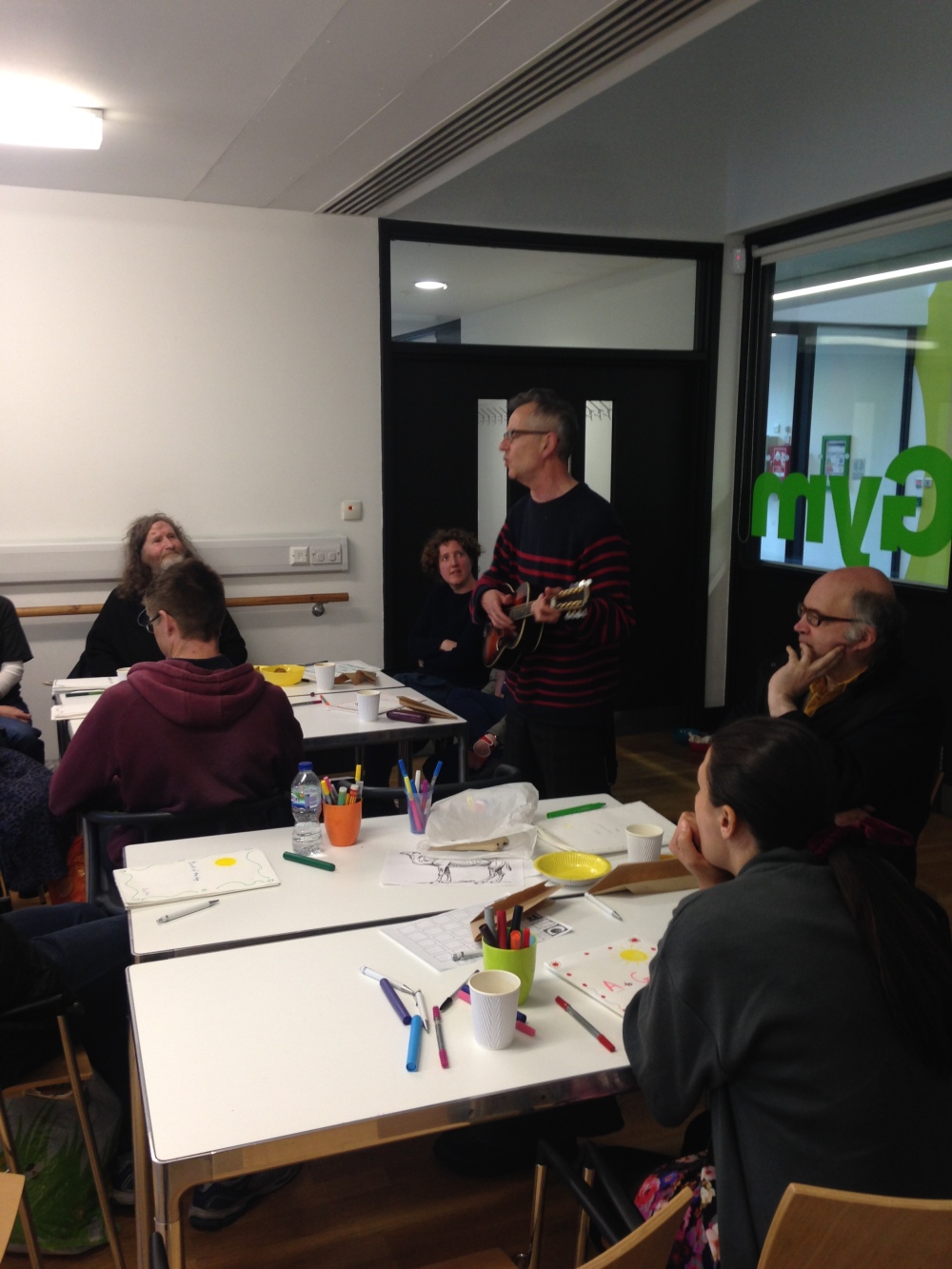 We almost think that might be it. But, no, as with all things Hegley, a goodbye song is to be sung. We don’t know who or what about. We’re making that bit up. ‘Things you find in the garden’ – another G. John strums, asking participants for their things found in the garden. Catterpillar’s, other people’s socks, mouldy apples, bicycle locks. And Action Men. Of course dug up toy Action Men, lost many years ago.

With that, we bade John farewell, but not before one of our participants got him to sign a book they’d loaned out from the Quaker Library in Islington. Hope they were pleased when the book was returned! 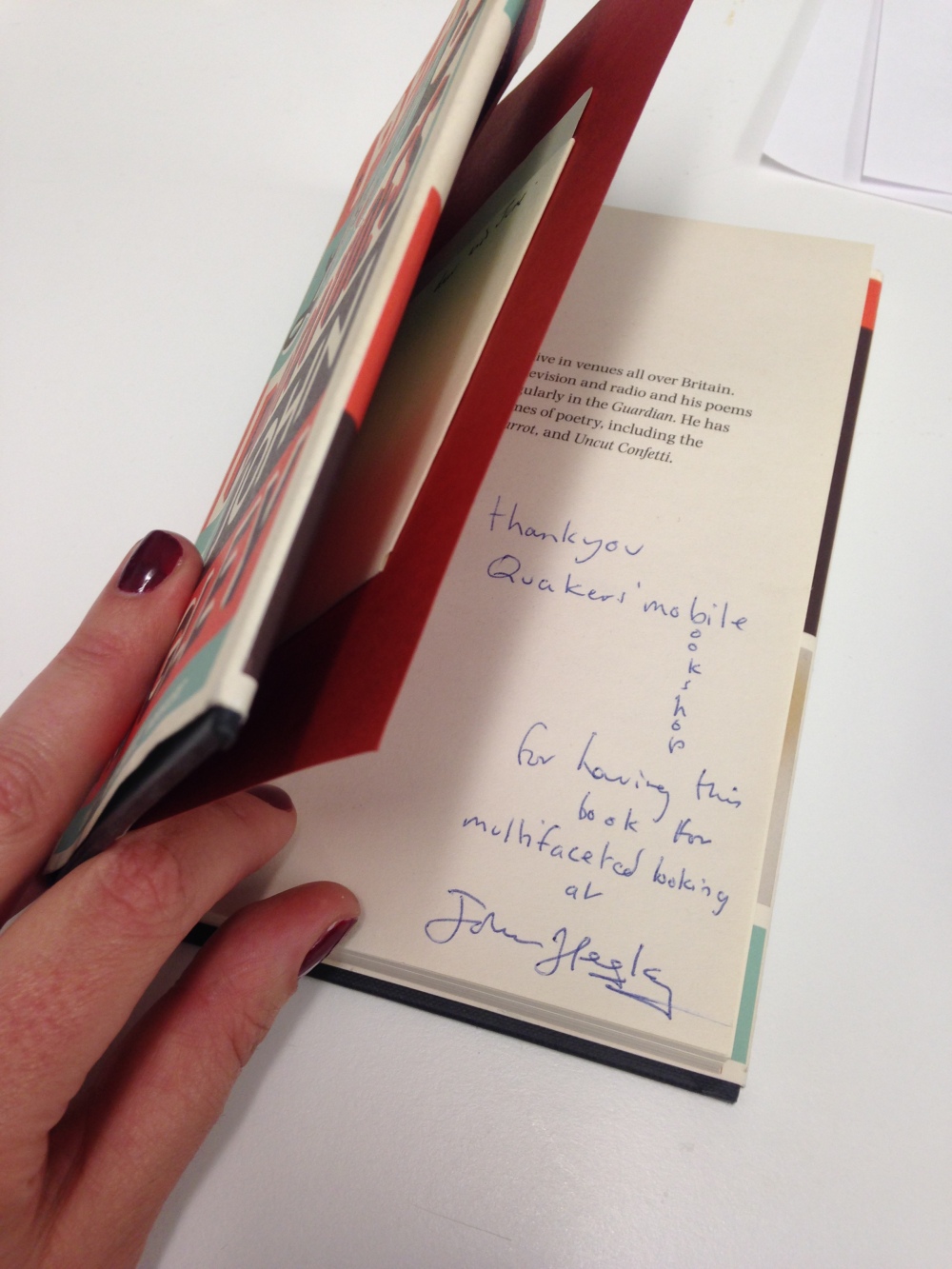 Some hearty thank you’s to Flapjacks Café for the delicious sandwiches and cakes, Mel, Director of Free Space Gallery for being absolutely magic, John Hegley for keeping what he was doing a surprise yet delivering exactly what I had in mind, and also to ThinkArts! and the The Richmond Fellowship for bringing their service users in for the day.

Our next event is a three week residency at Studio 3 Arts in Barking. We’ll be exhibiting works from Jan Arden and Marie-Louise Plum, amongst others, and also running workshops in drawing, print and sculpture. Stay tuned for details in our next update. 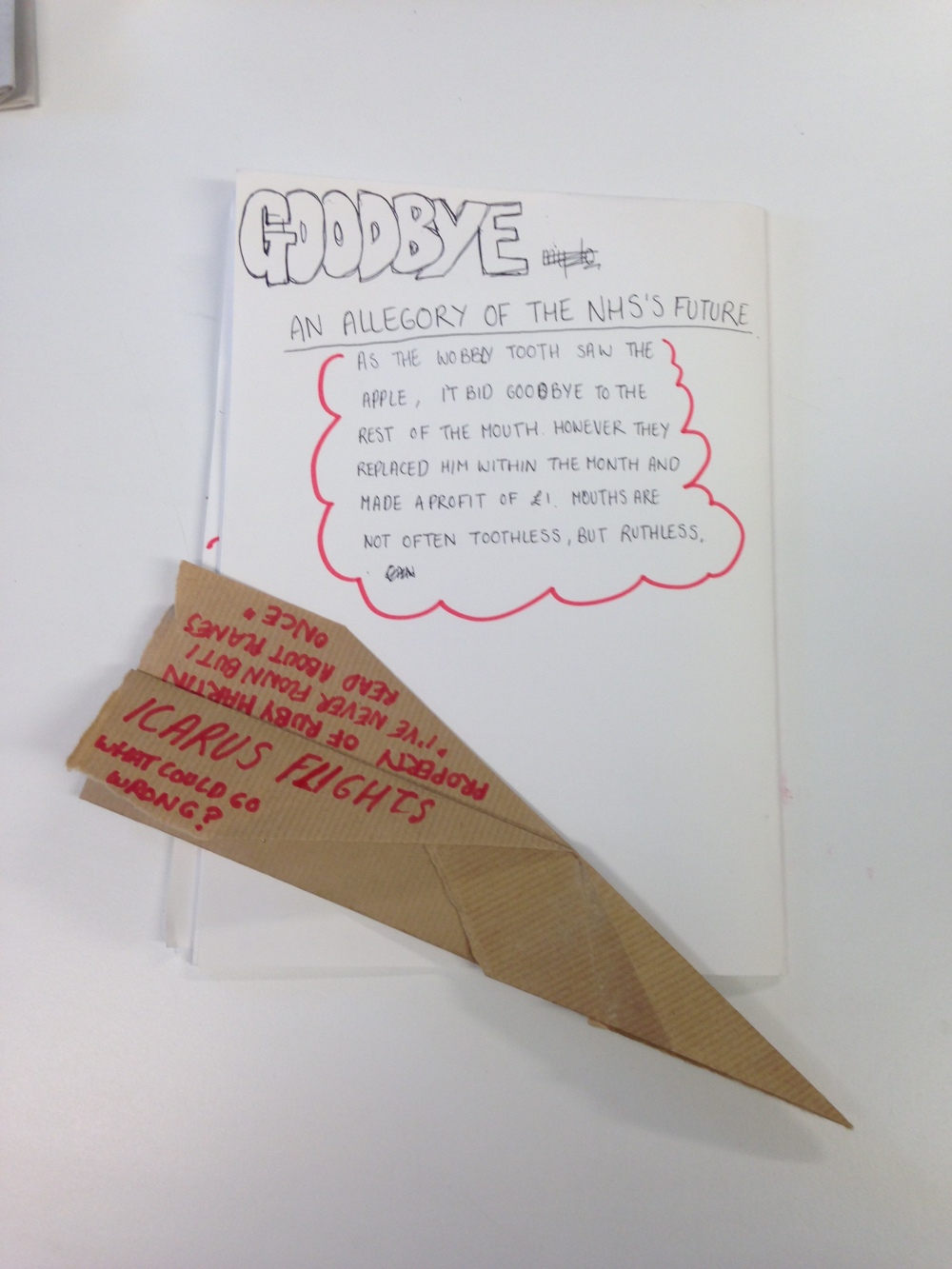