Before we share our thoughts on our recent visit to Outside In and Pallant House Gallery (blog post coming in the next few days), we’d like to share with you, dear readers, what they have coming up at Outside In. It’s exciting. It’s more than exciting. It’s…Nek Chand!

In their latest newsletter (sign up here to find out what else they have going on this month), Outside In announce that “an exciting exhibition of work by renowned outsider artist Nek Chand will be coming to Pallant House Gallery’s courtyard garden this month. Chand’s process is indicative of many historically renowned outsider artists, with a focus on found objects and recycled materials.”

The following text has been lifted from Outside In’s news page, available to view here. Image credits go to Outside In and Nek Chand. You’ve got bags of time to get down to Chichester to see this exhibition (runs 13 June – 25 October 2015), so do make sure you visit!

Born in 1924 in the village of Berian Kala, in what is now Pakistan, Chand relocated to India with his family in 1947. Eventually, he moved to Chandigarh in the northern part of the country; the first planned ‘utopian’ city in Post-Independence India, designed by Swiss architect Le Corbusier.

Nek Chand is a deeply spiritual man, fascinated by the mystical significance of rocks, who was by profession a public roads inspector. However, he began spending his evenings imagining and moulding figures out of recycled and found materials. Pursuing a vision from a dream, Chand cut back a clearing in the jungle on the outskirts of Chandigarh, situated in the middle of the Capitol Complex and the Sukhna Lake; the place where his Rock Garden was to come to life.

This space, he believed, had once been home to a glorious kingdom. His process is indicative of many historically renowned Outsider artists, with a focus on found objects and recycled materials. Chand uses discarded objects, such as broken crockery, electrical fittings, glass bangles and bicycle frames, building up the bulk of the figure with cement and sand mix. A final coating of smoothly burnished pure cement combined with waste materials would then be added. Chand believed that each figure contained the spirit of a human being, god or goddess. 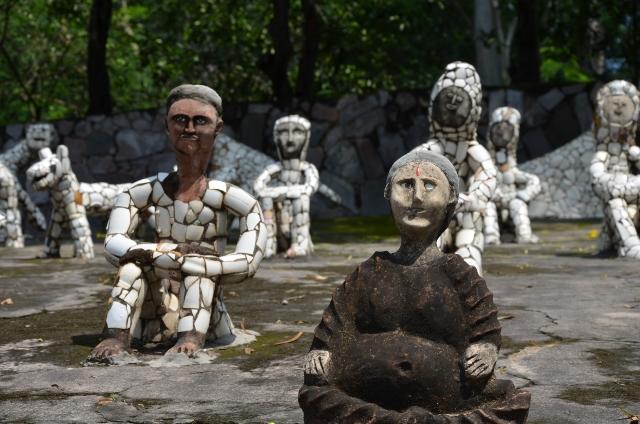 During the making of the Rock Garden Chand was consumed by his vision. He has said of the Garden: “It began really as a hobby. I started not with the idea that it would become so famous. Every day, after I finished my government job, I would come here to work for at least four hours. At first my wife didn’t understand what I was doing every day, but after I brought her to my jungle hut and showed her my creation, she was very pleased.”

In 1972, the Rock Garden – originally an illegal endeavour by Chand in his spare time – became a municipal authority-funded tour de force. Stunned by Chand’s creation, the authorities pumped money and labourers into the project; which is now the world’s largest visionary environment, with several thousand sculptures covering more than 25-acres. In 1976, it was opened to the public.

Although the public’s reception to the Rock Garden has been undoubtedly positive, the park was vandalised in 1996 whilst Chand was visiting the United States. The damage has since been rectified, with the incident resulting in the created of the Nek Chand Foundation in 1997.

The Foundation aimed to protect and promote the park internationally. Today, the Rock Garden is overseen by the Rock Garden Society, and opens its doors to over 5,000 visitors every day. In a country known for the slums that grow out of its waste, the Rock Garden is an example of one man’s unrivalled intuitive vision. Chand’s fascination with the creation of something from nothing; the conversion of waste into beauty, has resulted in one of the largest tourist attractions in the whole of India, second only to the Taj Mahal.

Nek Chand’s work has since been included in the Hayward Gallery’s 2013 exhibition ‘Alternative Guide to the Universe’, the exhibition ‘Raw Vision: 25 Years of Art Brut’ at the Halle Saint Pierre museum in Paris, as well as the Museum of Everything’s inaugural exhibition in Primrose Hill.

The exhibition of Chand’s work reflects the ethos of Outside In; the Gallery’s flagship project providing a platform for artists who define themselves as facing barriers to the art world due to health, disability, social circumstance or isolation. Although Outside In does not explicitly focus on Outsider Art, Chand’s self-taught process and dedication to his project resonates with many of the 2,000 artists represented on the project’s website.

The exhibition will include a selection of sculptures from the Nek Chand Foundation and will be in the Courtyard Garden and Garden Gallery at Pallant House Gallery, Chichester, from 13 June – 25 October 2015.