Six months later we have arrived at June. Terence and Harrison, together, have produced an impressive range of collaborative work, amassed many hours of filmed discussion and pushed personal boundaries to develop new approaches and methods of working.

Their meeting was the initiative of Outside In, who selected Terence and Harrison to work together on a four month residency, located at Free Space Gallery in Kentish Town, and Central Saint Martins in King’s Cross.

Together, the pair disseminated what it means to be artists working in contemporary London, arriving at their ultimate outcome by going on the creative journey itself. Their collaborative residency culminated in an two-floor exhibition at Free Space Gallery. The exhibition demonstrated their working methods, films, scripts, photographs, modified t-shirts and artworks created during their four months together.

Back in January, prior to the residency, I met Terence at the Tate Modern to discuss an upcoming Mental Spaghetti exhibition he took part in. He’d just been given the news that he would be awarded the residency opportunity. It was a lot to digest, he was excited and apprehensive, worried whether he would live up to the opportunity, and work well with the other artist involved.

The next time I saw Terence, he had met Harrison, and discovered that not only did they get on well, but Harrison had much the same worries as Terence, in relation to their place in art, and how the residency, and working together, would go.

Being given this opportunity, offering great potential, to explore and create, knowing that at the same time it will expose more of who we are, would make anyone nervous. Adding to the mix, a collaboration with someone, who, at the point of entry, is a stranger, to lay everything bare and work together, both responsible for the outcome, is without a doubt daunting proposition.

That was the beauty of this collaboration – documenting and sharing feelings of of identity and sense of self that we all feel, but often think we don’t have the license to express. That we must only succeed and absolutely not show any misgivings about our process.

I found the confessional side of Terence and Harrison’s process so profound; the majority of their intimate discussions based on life experience, such as love, loss, mental states and identity, so accessible to all of us, as vulnerable as we are underneath, in comparison to the considered image of who we are, that we present on the outside. An armour of sorts.

Terence and Harrison had produced, quite organically, through their discussions and discovery of each other, soundbites, slogans and ideas that allowed a pointed insight to the human condition. It was entirely human – inquisitive, touching, indecisive, self-assured, self-doubting, playful and serious.

I hope to see more from Terence and Harrison, working together, although not physically together at the residency any more. They have a collaborative blog, which I hope they will keep updating, now that they have moved on to new projects. To see more of their work, please take a look at their websites: Terence Wilde & Harrison Moore. 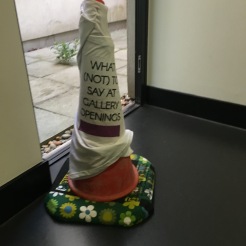 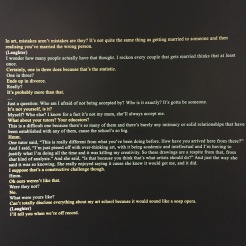 Background to the residency

“In 2014 Outside In worked with the University of Chichester to pair an Outside In artist with an MA Fine Art student to see how they could learn from each other in both life and in artistic practice.
Such a fruitful relationship occurred that Outside In wanted to replicate it with other university students and Outside In artists. The Kentish Town Health Centre approached Outside In about the possibility of a residency, and Outside In then approached Central Saint Martins to be part of the collaboration.
Proposals were received from both current and alumni students from the Fine Art Department. Harrison and Terence have got on really well, worked across many new disciplines and have developed their own artistic practice and ways of thinking. It seems that both artists will be leaving the process in a better mind set, but also as friends.”
Outside In
Blog address: http://www.sharedinsite.wordpress.com